Fabian’s Cafe and Pastry in Williamsburg, Brooklyn, on Bedford Avenue was a place I discovered by chance. Having arrived by the subway to Brooklyn at 9am, I reckoned no shops would be open and walked around aimlessly until I saw a Fabian’s that seemed to be open and had cute teacups hanging from a ribbon by their windows.

Walking in Fabian’s was gorgeous! The walls were light blue which matched the beautiful sky outside that day and there were light blue curtains with pretty, dainty tea cups hanging on every window.

I ordered a Cinnamon Spice Mocha. The smell of the cinnamon was heavenly. Even before drinking and placing it on the table, I was actually overpowered by the cinnamon. Not much chocolaty taste though. Still it was a brilliant hot drink for a cold day. 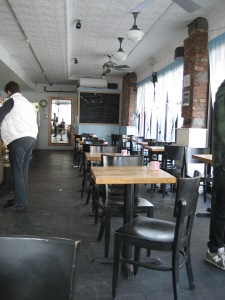 5 thoughts on “Fabian’s Cafe and Pastry”

Here are the 5 most recent posts!

Here are the 5 Most Read Posts!

Here you can find the archives!

Here are some Recent Tags!

Here are the number of people who dropped by!